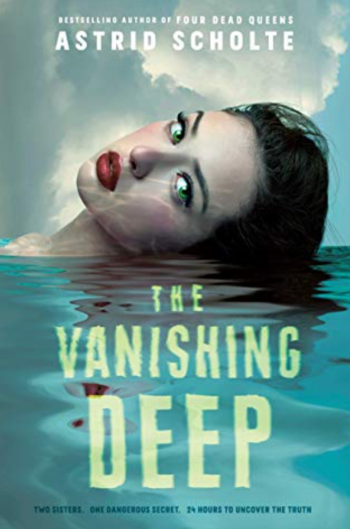 Tempe has spent the last 2 years diving and saving money to resurrect her sister, Elysea. After her sister’s death, Tempe learned that her sister withheld secrets about her role in their parents death. So Tempe is determine to spend their last 24 hours together learning the truth. But when Elysea tells Tempe what she knows, they must escape the facility and start down a dangerous journey to learn the truth and possible save their family.

➸ Lor: 19, Lost his best friend while rock climbing, Works/lives in the basement of Palindromena

Ohhh where to start… I had so many problems with this book. But lets start with the good:

This premise was so unique and intriguing! I absolutely loved the idea of a post-apocalyptic, water covered world. This was one of my most anticipated reads of the first half of the year because this concept was so compelling.

However that’s about where my enjoyment ended…. Because overall this book felt completely aimless and underdeveloped.

Where was the world building?? At one point I actually paused the audiobook to check the genre on Goodreads because I could never tell if this was intended to be a post-apocalyptic Earth or some sort of fantasy world. Everyone appeared to be human, but the world didn’t follow any sort of Earthly logic. Like boats having a limit of 3 people (how?), Crystal lung because of over-exposure to sea salt (there are millions of people who live on or around the Dead Sea – the most salt heavy sea in the world and this problem doesn’t exist…), there is extremely advanced technology to preserve and resurrect bodies, but the other islands live like they’re in 1800s….

Everything just felt so inconsistent. How has this world cured death but not disease? If there is this much technology, why isn’t it being used for other things like depleting resources? How/who created this technology? But worse than any of that, there were times this story didn’t follow it’s own rules – without going into spoilers, it’s harped on over and over that no one can be revived twice. Yet a solutions is miraculously devised in about 4 seconds flat when faced with a character death….

It felt like this book was unsure of what it wanted it’s plot to be. Was it a pirate story? A journey? A familial mystery? Hard-hitting? Post-apocalyptic? And instead it attempted and fell short on all of these. The pirates, despite being the main “villains” were wholly undeveloped or explained, the journey was somehow both extremely drawn out yet uneventful, the family mystery was so illogical and unbelievable, and the characters were too underdeveloped for the ever qualify as hard-hitting.

A plotless story can still work for me as long as the characters and their arcs are strong. But these characters were so flat that I never cared about a single one of them. Tempest is angry – that is her entire personality. Elysea is a dancer. And Lor is self-punishing. That’s it. There was no depth to anyone. No one really grew as a person. And the “romance” was atrocious and felt like it was just thrown in because “YA fantasy has romance”.

Honestly, by the end I was ready to throw the book against the wall if I had to hear about how Elysea was an amazing dancer or more damn time.

And that final showdown… gah! It managed to both predictable and wholly frustrating. I won’t lie, as I’m writing this review I’m realizing that 2.5 stars is probably a generous rating considering my level of annoyance with this book.

Overall this book was a massive let down. I was expecting a really fun, unique YA fantasy. But instead I got an underdeveloped and aimless story. While this book has a fascinating premise, it never seemed to settle on what exactly it wanted to be and ended up failing all around in my opinion.

9 thoughts on “Book Review: The Vanishing Deep by Astrid Scholte”